Did you ever realise the name you see every single day everywhere you go and probably never ever noticed it DIESEL. The car in front of you, the truck behind you, the service station you just passed DIESEL. No other name appears more than the inventor DIESEL.

I have my own views on this as it could so easily have been STUART, his engine was lighting up the statue of liberty and powering factories four years before Diesels invention got to completion, and he was BRITISH, not just the Olympics where good at then! 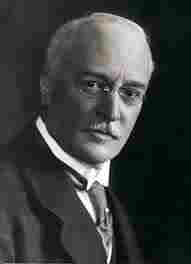 Diesel was born in Paris, France in 1858, the second of three children of Elise (née Strobel) and Theodor Diesel. His parents were Bavarian immigrants living in Paris. Theodor Diesel, a bookbinder by trade, left his home town of Augsburg, Bavaria, in 1848. He met his wife, a daughter of a Nuremberg merchant, in Paris in 1855 and became a leather goods manufacturer there.Rudolf Diesel spent his early childhood in France, but as a result of the outbreak of the Franco-Prussian War in 1870, his family (as were many other Germans) was forced to leave. They settled in London. Before the war's end in 1871, however, Diesel's mother sent 12-year-old Rudolf to Augsburg to live with his aunt and uncle, Barbara and Christoph Barnickel, to become fluent in German and to visit the Königliche Kreis-Gewerbsschule (Royal County Trade School), where his uncle taught mathematics.At age 14, Rudolf wrote a letter to his parents stating that he wanted to become an engineer. After finishing his basic education at the top of his class in 1873, he enrolled at the newly-founded Industrial School of Augsburg. Two years later, he received a merit scholarship from the Royal Bavarian Polytechnic of Munich, which he accepted against the wishes of his parents, who would rather have seen him start to work.One of his professors in Munich was Carl von Linde. Diesel was unable to be graduated with his class in July 1879 because he fell ill with typhoid. While waiting for the next examination date, he gained practical engineering experience at the Gebrüder Sulzer Maschinenfabrik (Sulzer Brothers Machine Works) in Winterthur, Switzerland. Diesel was graduated in January 1880 with highest academic honours and returned to Paris, where he assisted his former Munich professor, Carl von Linde, with the design and construction of a modern refrigeration and ice plant. Diesel became the director of the plant one year later.In 1883, Diesel married Martha Flasche, and continued to work for Linde, gaining numerous patents in both Germany and France.In early 1890, Diesel moved to Berlin with his wife and children, Rudolf Jr, Heddy, and Eugen, to assume management of Linde's corporate research and development department and to join several other corporate boards there. As he was not allowed to use the patents he developed while an employee of Linde's for his own purposes, he expanded beyond the field of refrigeration. He first worked with steam, his research into thermal efficiency and fuel efficiency leading him to build a steam engine using ammonia vapour. During tests, however, the engine exploded and almost killed him. He spent many months in a hospital, followed by health and eyesight problems. He then began designing an engine based on the Carnot cycle, and in 1893, soon after Karl Benz was granted a patent for his invention of the motor car in 1886, Diesel published a treatise entitled Theorie und Konstruktion eines rationellen Wärmemotors zum Ersatz der Dampfmaschine und der heute bekannten Verbrennungsmotoren [Theory and Construction of a Rational Heat-engine to Replace the Steam Engine and Combustion Engines Known Today] and formed the basis for his work on and invention of, the Diesel engine.Diesel understood thermodynamics and the theoretical and practical constraints on fuel efficiency. He knew that as much as 90% of the energy available in the fuel is wasted in a steam engine. His work in engine design was driven by the goal of much higher efficiency ratios. After experimenting with a Carnot Cycle engine, he developed his own approach. Eventually he obtained a patent for his design for a compression-ignition engine. In his engine, fuel was injected at the end of compression and the fuel was ignited by the high temperature resulting from compression. From 1893 to 1897, Heinrich von Buz, director of MAN AG in Augsburg, gave Rudolf Diesel the opportunity to test and develop his ideas. Rudolf Diesel obtained patents for his design in Germany and other countries, including the USA

In the evening of 29 September 1913, Diesel boarded the post office steamer Dresden in Antwerp on his way to a meeting of the Consolidated Diesel Manufacturing company in London. He took dinner on board the ship and then retired to his cabin at about 10 p.m., leaving word to be called the next morning at 6:15 a.m. His cabin was found empty during a roll call and he was never seen alive again. A search of his cabin revealed that Diesel's bed had not been slept in, although his nightshirt was neatly laid out and his watch had been left where he could see it from the bed. His hat and overcoat were discovered neatly folded beneath the afterdeck railing.[4] Ten days later, the crew of the Dutch boat Coertsen came upon the corpse of a man floating in the ocean. The body was in such an advanced state of decomposition that it was unrecognizable and they did not bring it aboard. Instead, the crew retrieved personal items (pill case, wallet, pocket knife, eyeglass case) from the clothing of the dead man, and returned the body to the sea. On 13 October these items were identified by Rudolf's son, Eugen Diesel, as belonging to his father.There are various theories to explain Diesel's death. His biographers, such as Grosser (1978), present a case for suicide, and clearly consider it most likely. Conspiracy theories suggest that various people's business or military interests may have provided motives for homicide, however. Evidence is limited for all explanations.Shortly after Diesel's disappearance, his wife Martha opened a bag that her husband had given to her just before his ill-fated voyage, with directions that it should not be opened until the following week. She discovered 200,000 German marks in cash and a number of financial statements indicating that their bank accounts were virtually empty.

Rudolf Diesel(1858–1913)After Diesel's death, the Diesel engine underwent much development and became a very important replacement for the steam piston engine in many applications. Because the diesel engine required a heavier, more robust construction than a gasoline engine, it was not widely used in aviation (but see aircraft Diesel engine). The Diesel engine became widespread in many other applications, however, such as stationary engines, submarines, ships, and much later, locomotives, trucks, and in modern automobiles. Diesel engines are most often found in applications where a high torque requirement and low RPM requirement exist. Because of their generally more robust construction and high torque, Diesel engines have also become the workhorses of the trucking industry. Recently, diesel engines that have overcome their weight penalty have been designed, certified, and flown in light aircraft. These engines are designed to run on either Diesel fuel or more commonly jet fuel.The Diesel engine has the benefit of running more fuel-efficiently than gasoline engines due to much higher compression ratios and longer duration of combustion, which means the temperature rises more slowly, allowing more heat to be converted to mechanical work. Diesel was interested in using coal dust or vegetable oil as fuel, and in fact, his engine was run on peanut oil. Although these fuels were not immediately popular, during 2008 rises in fuel prices, coupled with concerns about oil reserves, have led to more widespread use of vegetable oil and biodiesel. The primary source of fuel remains what became known as Diesel fuel, an oil byproduct derived from refinement of petroleum.Patent dispute with Herbert Akroyd Stuart

Akroyd-Stuart's compression ignition engine (as opposed to spark-ignition) was patented two years earlier than Diesel's similar engine; Diesel's patentable idea was to increase the pressure. Due to the lower pressures used, the hot bulb engine, with an internal pressure of about 90 PSI, as opposed to the Diesel engine's c. 500 PSI, had only about a 12% thermal efficiency versus more than 50% for some large Diesels. Details of the claim that a patent submitted by Herbert Akroyd Stuart has pre-dated that of Rudolf Diesel may be found under the name of that inventor.The high compression and thermal efficiency is what distinguishes the patent granted to Diesel from a hot bulb engine patent. 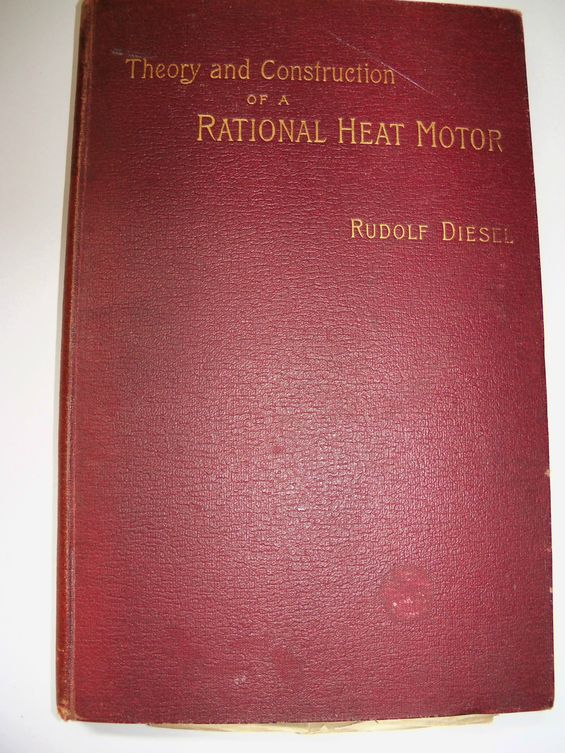 And here is a copy of this extremely rare book "Theory and Construction of a Rational Heat Motor" owned by the webmeister. First edition printed in 1894 and describing how this engine would run on Coal Dust!

I need to know more of Benz engines